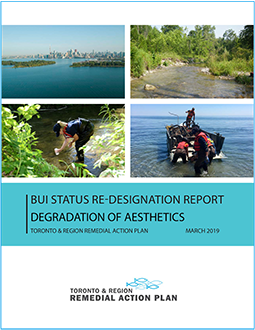 The Re-designation of the Degradation of Aesthetics Beneficial Use Impairment (BUI) Report has been submitted to the federal and provincial leads for the Canada Ontario Agreement (COA) on the Great Lakes.

Degradation of aesthetics was initially listed as impaired due to excess foam and oil slicks from industrial discharges (such as pulp and paper and steel mills).

Thanks to considerable efforts to improve the management of municipal and industrial stormwater and sewage, as well as increased public education, aesthetic conditions have significantly improved since the RAP began in 1987.

The Toronto and Region RAP and our partners have committed to a number of ongoing projects that will ensure the maintenance of aesthetically pleasing Toronto waterways.

From 2017 to 2019, the development of a partnership to keep Toronto’s waterfront clean, and of a “floatables strategy” to guide these efforts, was funded through the AOC stream of Environment and Climate Change Canada’s Great Lakes Protection Initiative program.

Toronto and Region Conservation Authority, the City of Toronto, Ports Toronto, and Harbourfront Centre, with input from University of Toronto and Swim Drink Fish, developed a floatables strategy that identifies opportunities for floating debris removal, policy development, new partnerships, and ongoing monitoring of floating garbage and debris in Toronto’s waters.

It’s not just about litter clean-ups anymore either. Ports Toronto is leading the charge on the installation of floating trash bins called “seabins” along the Toronto waterfront. These seabins collect floating garbage and micro-plastics as small as 2 millimetres. They also contain a filtration pad that absorbs hydrocarbons like fuel and oil.

Seabin launch at Pier 6 in Toronto. Seabins collect floating debris by sucking in water from the surface and pulling it through a catch bag, trapping garbage and other debris.