The Don Mouth Naturalization and Port Lands Flood Protection and Enabling Infrastructure Initiative (PLFPEI) is one of the largest infrastructure projects in Toronto’s history.

Located in Toronto’s Port Lands, this $1.25-billion initiative will reconnect the Don River to Lake Ontario by creating more than 1000 metres of new river channel and a naturalized river mouth. 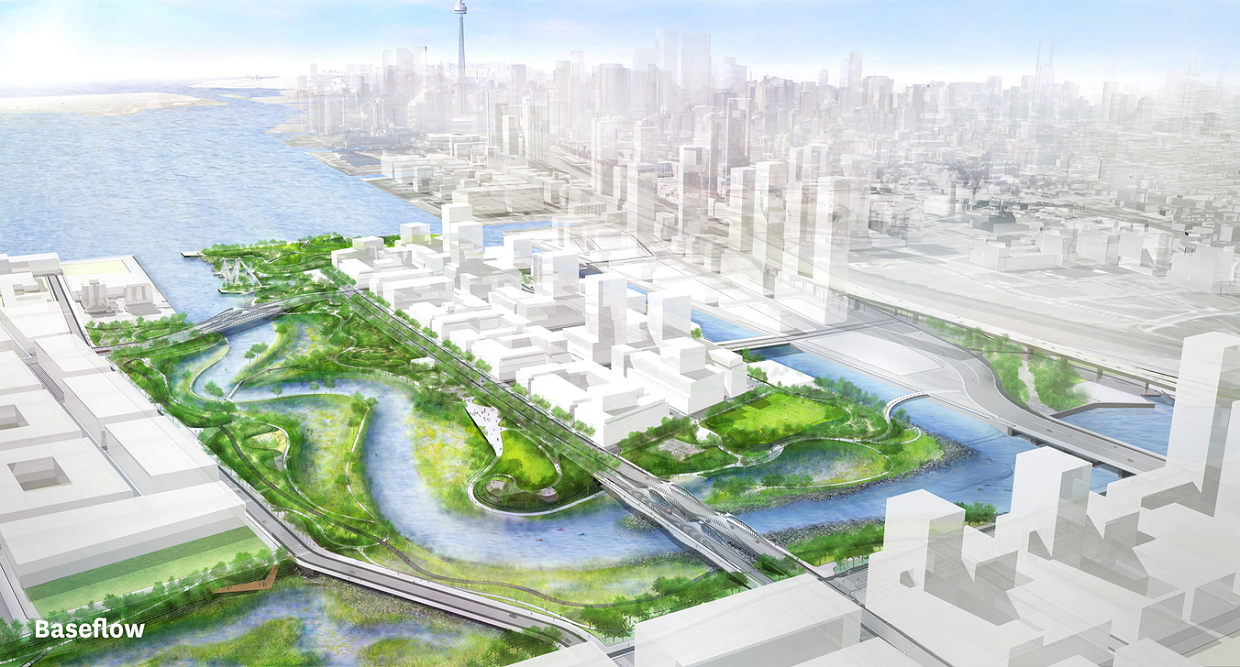 The naturalized river valley will add 16 hectares of new parkland, promenades, and riverfront open space to the eastern waterfront, as well as 14 hectares of new aquatic habitat and wetlands to improve biodiversity and water quality, and attenuate flooding and erosion.

The project is expected to be completed in 2024.

LEARN MORE ABOUT THE PROJECT

Background: History of the Eastern Waterfront

The Port Lands were created in the early 20th century through the infilling of Toronto’s Ashbridges Bay Marsh — a 428-hectare coastal marsh that once characterized the Toronto waterfront east of the Don River.

At the time, the mouth of the Don River was also straightened to form what is now Keating Channel.

Industrial activities — ranging from sawmills to cattle processing to petroleum storage — began to move in along the Don River’s banks, and significantly altered the river’s form and function.

The industrialization of the Don and the loss of this coastal marsh contributed to the designation of Toronto and Region as an Area of Concern (AOC). It resulted in increased flooding, loss of aquatic habitat, and reduced fish and wildlife diversity and abundance.

Adopted in 2003, the City of Toronto’s Wet Weather Flow Master Plan (WWFMP) is a 25-year stormwater management plan intended to protect Toronto’s waterways and environment from the impacts of wet weather flow. 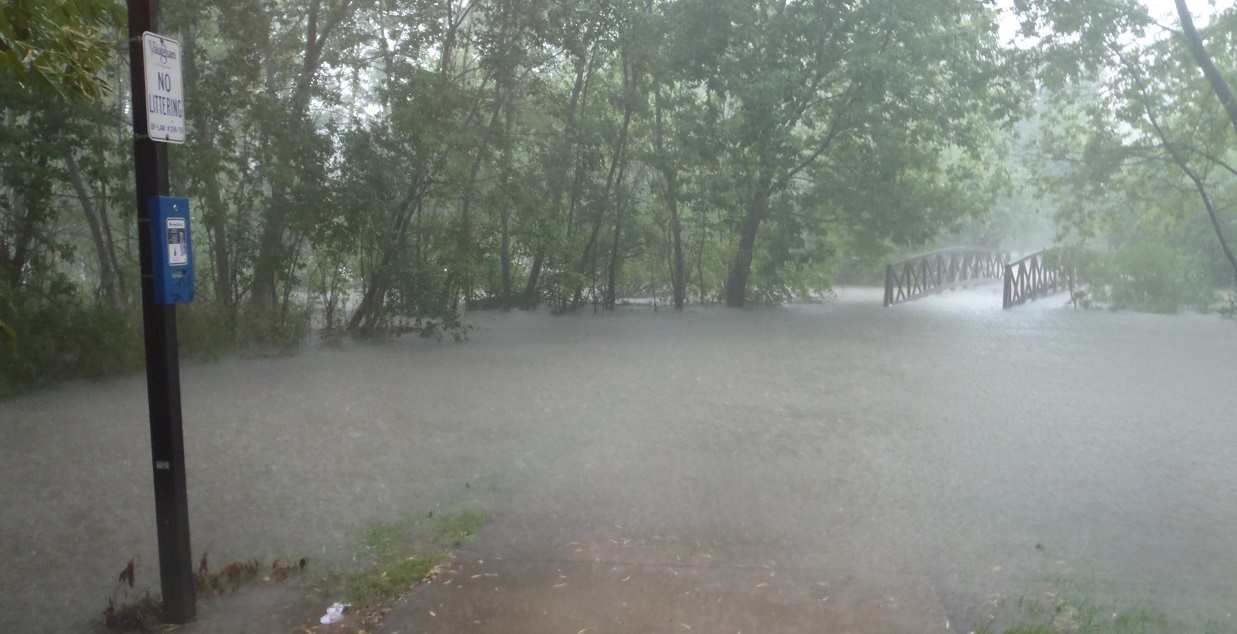 Heavy rainfall in August 2018 led to flooding in areas across the GTA.

Through implementation of the WWFMP, the City of Toronto is taking steps to:

The implementation of the City of Toronto’s WWFMP is identified in the Toronto and Region RAP work plan as an action that will advance re-designation of the beach closures (BUI 10) and eutrophication or undesirable algae (BUI 8) impairments.

Approved by City Council in 2011, the project will improve water quality in the Lower Don River, Taylor-Massey Creek, and Toronto’s inner harbour via an integrated wet weather flow management system that captures, stores, and transports discharges from all combined sewer outfalls that feed into these waterways.

The preliminary design was completed in 2015 and construction of the first phase, the Lower Don Tunnel/Coxwell Bypass, began in 2018. Construction will take place over a period of 25 years, with a completion target of 2038.

The current cost for the Don and Central Waterfront CSO project is over $3 billion. Completion as early 2030 may be possible (per a June 2019 City of Toronto staff report) with an additional $1.07 billion in external funding.

The Ashbridges Bay Landform project is an integral component of the Don and Central Waterfront CSO project.

The landform will be the site of a new high rate treatment plant where combined sewer overflow (CSO) treatment will occur.

The benefits of the project include:

Construction of the roughly 27-hectare landform began in 2019 and is expected to be completed by 2024. 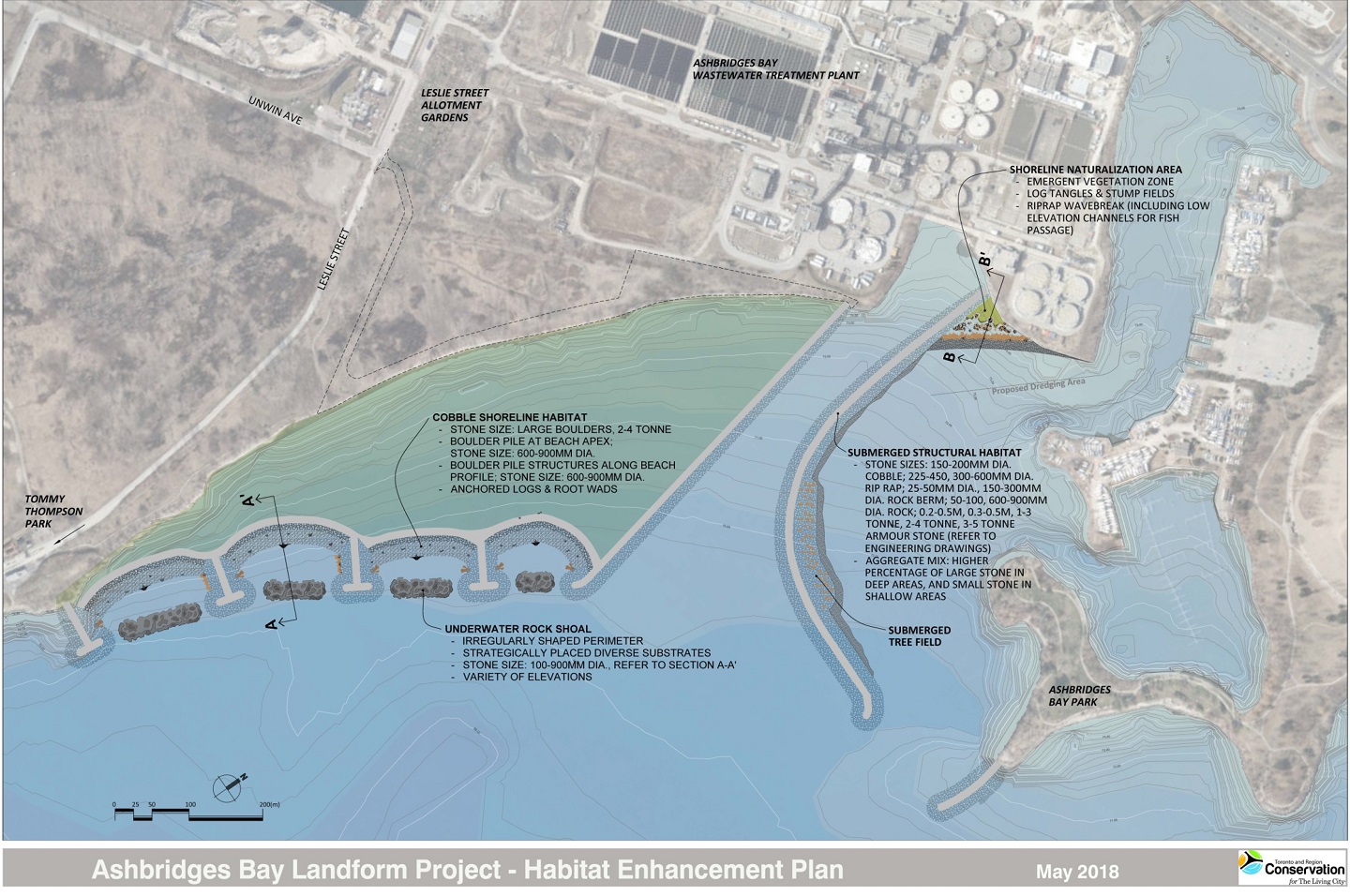 The aquatic habitat components of the project include:

While Toronto’s waterfront is much cleaner today than it was in 1987, this improvement isn’t always clearly visible to the public — in part because of the presence of plastics and other floating litter, known collectively as “floatables”.

TRCA, the City of Toronto, Ports Toronto, and Harbourfront Centre, in consultation with the University of Toronto and Swim Drink Fish, are currently in the process of reviewing the draft Floatables Strategy.

This draft strategy identifies opportunities for the development of policy, removal of floatables, ongoing monitoring of floating debris and garbage, and the creation of new partnerships.

Once the review is completed, the Floatables Strategy will be maintained as a living document, with the possibility of engaging new stakeholders in adopting the program to areas of the Lake Ontario waterfront beyond the Toronto Harbour.

Ports Toronto is spearheading the installation of floating trash bins called “seabins” along the Toronto waterfront.

Designed to eliminate single-use plastics, microplastics, and other harmful materials from our waterways, seabins can gather pieces of debris as small as 2 millimetres that pass within their vicinity.

The project began with the successful pilot installation of seabins at the Outer Harbour Marina in 2019. The program has since expanded to include Toronto’s inner harbor.

Ports Toronto has also partnered with the University of Toronto Trash Team to develop a research and education application for the seabin program.

The U of T Trash Team will collect and analyze the contents of the Seabins, and will use the results to determine where materials originated. This knowledge, in turn, will inform education programs aimed at preventing plastics, microplastics and other litter from reaching our waterways. 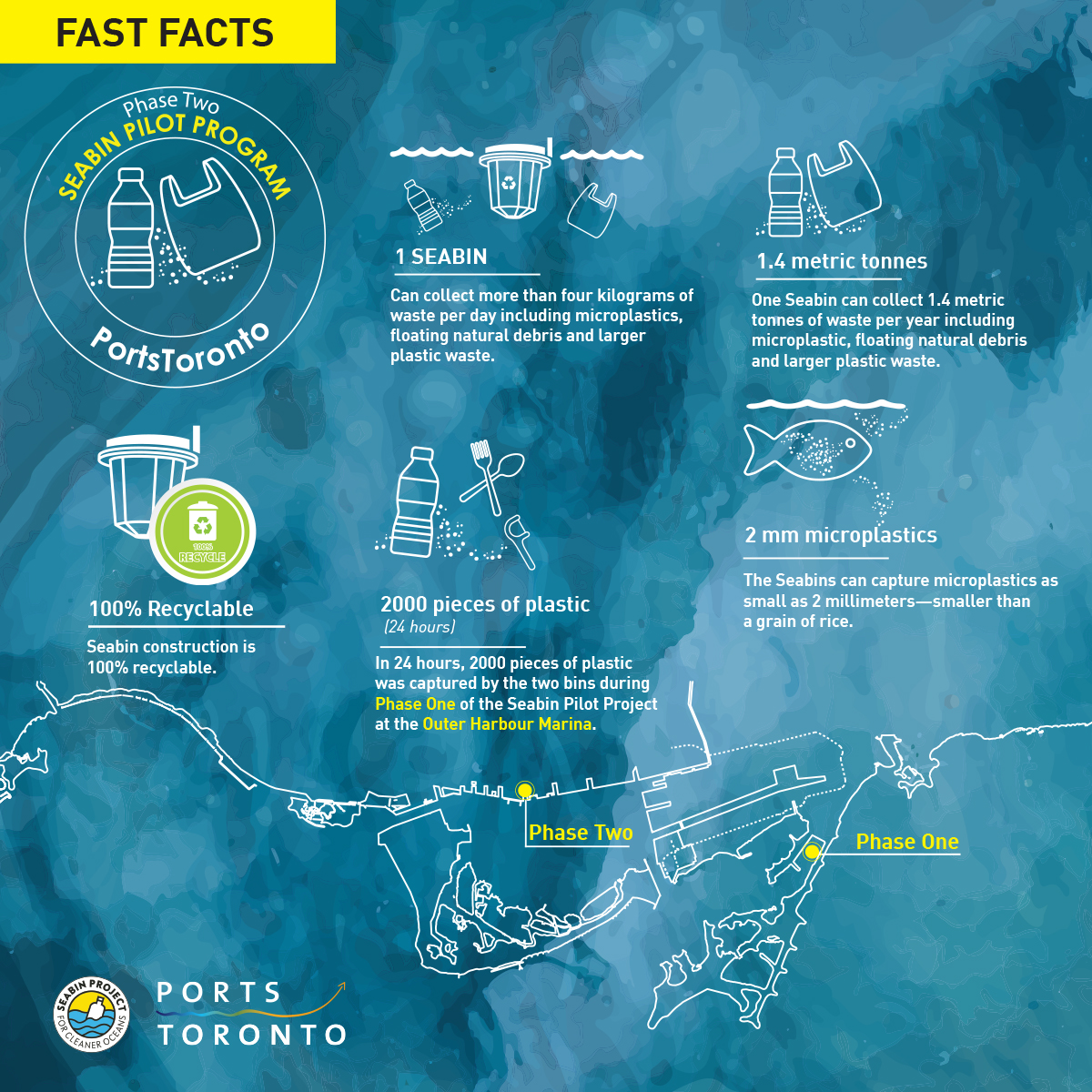