How Are Fish Faring in Toronto and Region? 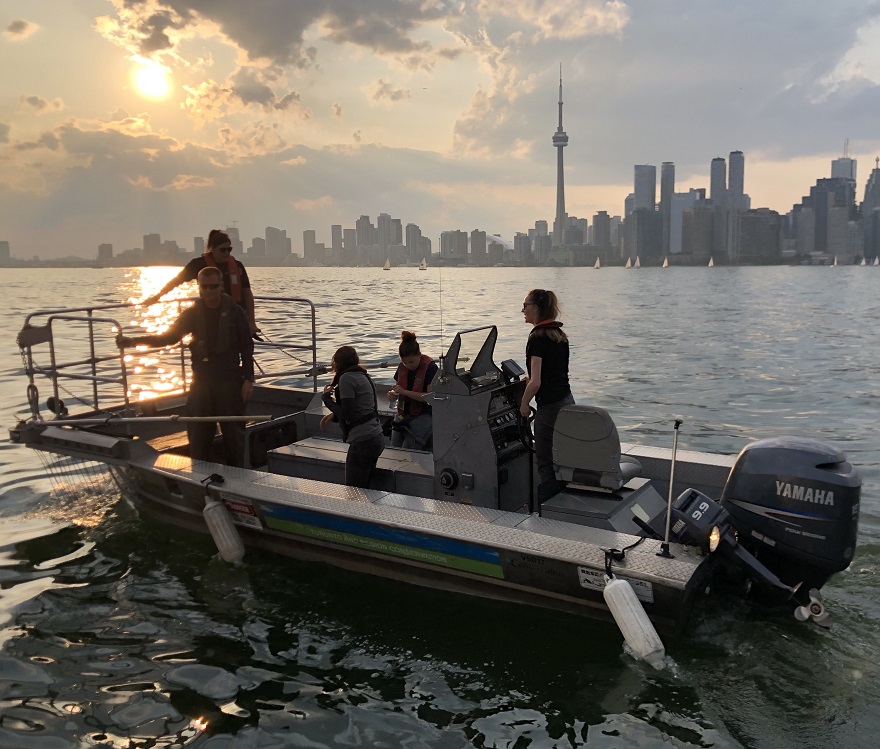 More than 30 years of electrofishing and nearly a decade of hydroacoustic and telemetry surveys have been conducted in Toronto’s waters by Toronto and Region Conservation Authority (TRCA) and the Department of Fisheries and Oceans Canada.

Thanks to this robust data set, this is what we know about the fish of Toronto:

Fish Communities Remain Impaired.
When compared to waterscapes similar to the Toronto and Region AOC’s, fish community metrics like species richness, proportion of piscivore biomass, and index of biotic integrity are generally lower. This is not true everywhere, though: for instance, the Toronto Islands have similar fish community metrics to reference locations around the lake.

Forage Fish are Not Impaired.
There is no evidence for impairment in forage fishes relative to regional comparison sites, particularly in the central waterfront. Hydroacoustic surveys suggest the Toronto and Region AOC is dominated by small bodied fishes, such as Alewife.

Top Predator Populations Remain Low But Stable.
There were no increases in catch from 1989-2018 for native top predators in the Toronto AOC. Northern Pike populations appear to be stable in most ecotypes and regions where they were found.

Embayments Attract More Fish.
Like other Lake Ontario sites, the Toronto and Region AOC is characterized by low fish density throughout the open coast and higher fish density in embayments and other sheltered areas. Embayments had the highest encounter rates when sampling for all species except Smallmouth Bass.

Declines in Some Species May Be Attributable to Loss of Historic Fish Habitat.
Walleye and Smallmouth Bass are rarely encountered during surveys, lending evidence to the historical importance of the Don River and adjacent marshes for these species.

How Can We Better Support Native Fish?

Continue to Restore and Improve Fish Habitat
Restoration initiatives continue to take place along the waterfront to address the loss of historic aquatic habitats including beaches, cobble reefs, estuaries, bays, and productive wetlands. Restoration projects are guided by the Toronto Waterfront Aquatic Habitat Restoration Strategy (TWAHRS), which aims to maximize the potential ecological integrity of the Toronto waterfront.

Focus on Resident Fish.
Largemouth Bass, Northern Pike, Bowfin, Brown Bullhead, and Yellow Perch are resident fish species in the Toronto and Region AOC, as opposed to Common Carp, Walleye, and White Sucker which are non-resident (migratory) species. Resident species are more likely to respond to changes in conditions within the Toronto AOC. Assessing resident species therefore provides a clearer picture of progress within the AOC.

Encourage Regional Management of Migratory Fish.
This is particularly important for invasive species like Common Carp that regularly travel outside the Toronto and Region AOC.

In 2020, the Degradation of Fish Populations Beneficial Use Impairment (BUI 3) Status Assessment was released. (The report focuses solely on fish, since wildlife was not considered impaired when Toronto and Region was designated an AOC.)

A wildlife status assessment report for the Toronto and Region AOC was completed in 2018. READ THE REPORT.

Explore TRCA’s Watershed and Ecosystems Reporting Hub to learn more about the state of fish populations on the Lake Ontario nearshore.

Select the image below to visit the reporting hub.